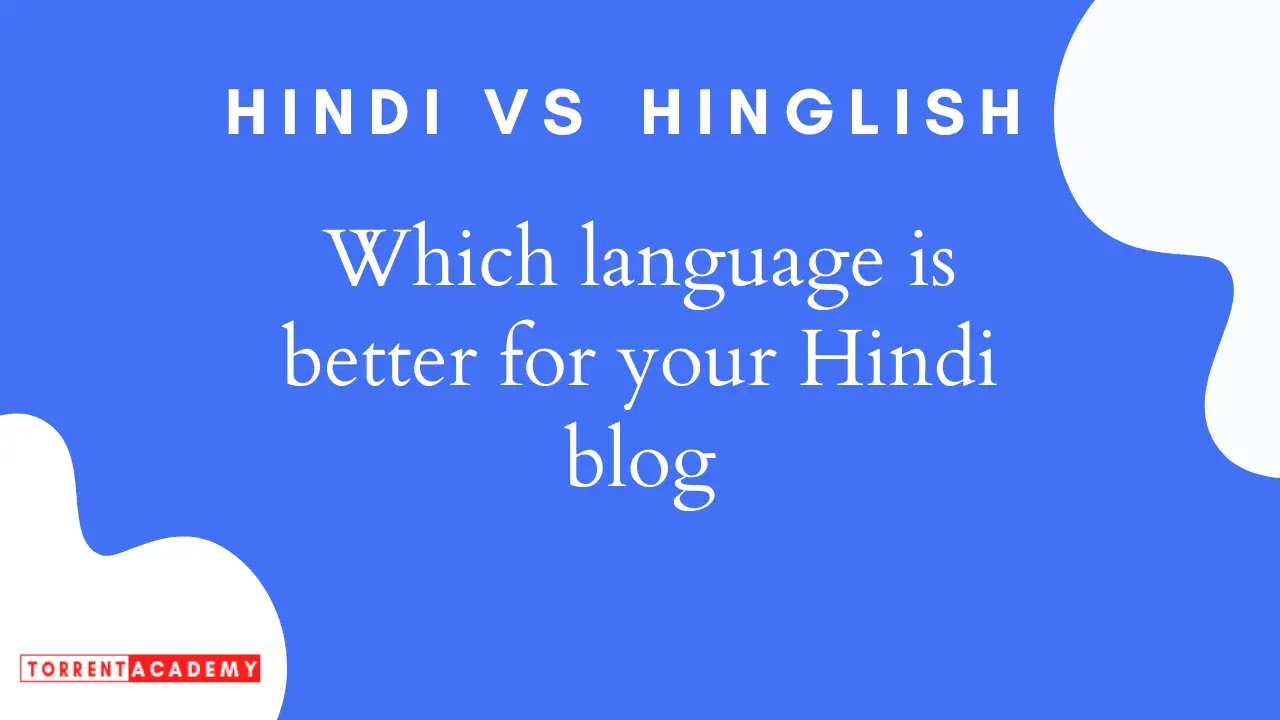 Hindi vs Hinglish Comparison- Which is the best language for your Hindi blog.

Hindi vs Hinglish: The biggest problem in Hindi blogging is choosing a language between Hindi and Hinglish. In which language should you blog and why? Probably every Hindi blogger wants to know the answer to this question. Today I am telling you some important information about Hindi and Hinglish. I hope that after this you will be able to choose the right language for your blog.


Actually, the target of a blogger blogging in Hindi is the Indian audience only. He has to decide whether he should blogging in Hinglish or in Hindi what will be better for his future and which path he should suck.

Last some time, the google search engine has enabled the Hindi searching feature in mobile devices, and now its effect is visible in the desktop version also. Due to which the option of "view results in Hindi" comes when the user searches in Hinglish in Google.
By clicking on it, the keywords you searched get translated into Hindi. For example, I will search in Google that "English Kin Deso Main Boli Jati Hain" then google will convert it to "Hindi or Hinglish"

Now, because of this service of Google, the post written in full Hindi comes on top in the search. This is a big problem for Hinglish bloggers and it has forced every Hinglish writer to think in which language he should be blogging now.

I am also a Hindi blogger, but till now I have not decided about it and there are many Hinglish bloggers apart from me who are still writing in Hinglish. What is its reason and what will be the future of Hinglish blogger? Let us know about it in detail.

First of all, I would like to tell you some information about Hindi and Hinglish, what is the difference between them and whose value is more there.

Hindi is written in the Devanagari as a base language. Which is also called Modern Standard Hindi. It is a Hindustani language and is spoken almost all over India. Hindi is constitutionally the first (official language) of India and is the most spoken and understood language of India. It is the most spoken language in the world after the Chinese language.

Apart from this, the Urdu language is spoken by 14.1 million in Pakistan and another country is orally similar to Hindi. I mean 90% of the people who speak, write and read Urdu can understand Hindi very well.

There are many languages ​​in our country India but I am sure apart from only a few people in India, about 1 billion (1 crore) people are experts in Hindi and can read and write Hindi well.

Finally, it would not be wrong to call the Hindi language the official language of India and it is spoken in many countries other than India also. As I have mentioned above, it is the second-largest language in the world, which means it is one of the top international languages.

For more information about Hindi, you can visit the Wikipedia Hindi page. For this, I would suggest that once you understand Hindi as well.

Hinglish is a mixture of both Hindi and English. Which means to do the words of two languages ​​together. It is mostly used in urban and semi-urban areas of the Hindi Bashi state of India. The Hinglish language is slowly spreading rapidly in rural and nearby areas through television, mobile phones, and oral communication.

Hinglish is not only spoken in India but it is also spoken and read in the USA and UK and some other countries. Today its trend has increased a lot. Hinglish has done lotus on the internet. Any user, whether it is social media or some other language, does the language of Hinglish language because it is easier to read and write than Hindi.

David Crystal jo is a British Language Scientist at the University of Wales, he told in the 2004 calculation that 350 million people in the world know Hinglish and in the coming days, a day will come when Hinglish will become the most spoken language in the world.

For example, Columnist Devyani Chaubl was the first woman writer who first used Hinglish in her writing. After that writing, Shobha De used Hinglish words in her books and columns. Apart from this, Salman Rushdie and Upamanyu Chatterjee have also used Hinglish a lot in their writing.

Finally, the field of Hinglish is also growing at a fast pace but still, I cannot say that Hinglish is a popular language like Hindi. Because it is a mixture of Hindi and English made by Indian people, which does not have an entity of its own. For more information about Hinglish, you visit the Wikipedia Hinglish page.

What are the differences between Hindi or Hinglish?

You can translate the Hindi language in any other language whereas it is difficult to do so in Hinglish.
Hindi is the original language of India and almost all the people (those who do not know English at all) know Hindi. Whereas basic knowledge of English is necessary to write and read Hinglish.

The future of the Hindi blog is not as good as that of the Hinglish blog.

By translating Hindi into other languages, readers who know any language can read your articles, whereas it is very difficult to be like this in Hinglish.

In my experience, as far as I know, the Hindi blog has a very good future, and you can clearly see that the Hindi blog can be a very big field but it is difficult to say about Hinglish like this.

As of now no future is decided but I cannot say anything about the time to come, maybe if the prediction made by David Crystal comes true then Hinglish is a circuit to join the world popular language one day.

This Blog is Protected by DMCA.COM